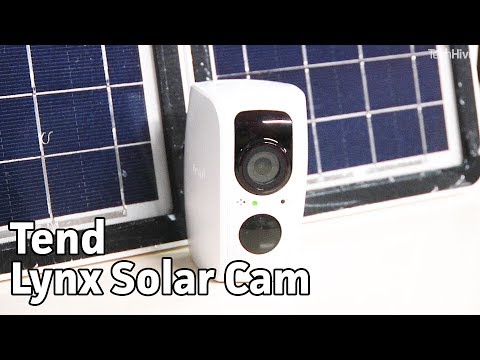 There are two key features of the Lynx solar security camera: free 7-day cloud video storage and a solar panel It also has facial recognition and a more flexible mount than competing cameras

First the storage and a lot of competing cameras charge a few dollars a month for keeping video clips in the cloud You'll want this because you can't watch 24 hours, and if something happens you'll want the footage stored Those monthly dollars add up, especially if you have several cameras, so free storage is a great deal And then there's the solar panel It means complete freedom in where you can mount the camera as you don't need to be near an electrical outlet

This is especially useful if you have a long driveway or want to put a camera along a rear fence at your property In our tests, the solar panel kept the camera battery topped up without any problem After disconnecting the panel, the camera continued to run on battery power for almost a week When it eventually died, I hooked the panel back up and the battery was back at 100% after 24 hours on a sunny California day And another off-the-grid feature: if the camera loses its WiFi connection, it will store data internally and transfer it when it reconnects

That's not offered on most competitors So far, so good, but all of this is useless if it doesn't do a good job as a security camera The video is 1080p high-def and includes night vision Both of those are pretty standard these days It also includes facial recognition, which is a feature I've experienced on several cameras and never found to be totally reliable

And the same was true on this camera While it did a decent job at recognizing me and the mailman, it would once or twice get confused by the hub cap of my car and think it was a person's face — that's a problem I've had with other cameras too The app allows for adjustments to motion detection, night vision and – this is a neat idea — even to flip the video image if the camera has to be installed upside down Like other security cameras, it will alert you to movement and lets you remotely talk and listen through the camera Installation was easy

As mentioned, it will go anywhere thanks to its solar panel The only thing I would change is a sturdier bracket for the camera It was a little springy and the camera sometimes bounced around in the wind The Lynx Solar Cam and the solar panel are $200, which compares favorably with many competing smart home security cameras and is especially good when you remember there aren't monthly storage costs TechHive rated it 4 out of 5