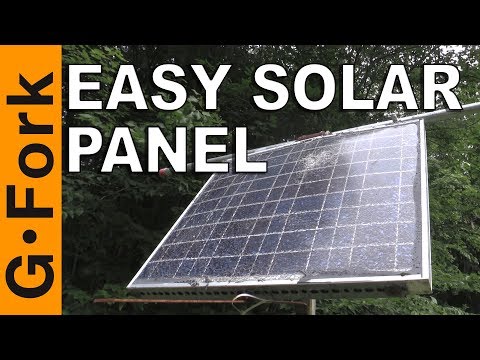 – You wanna learn how to install a really simple solar panel set-up, pretty inexpensive? You can run some stuff in your cabin, or your house, or even your apartment? – [Camera Man] Yeah – All right

Here we go This is a solar panel set-up I helped a buddy of mine put together, probably 10 years ago Is it 10 years, you think? – [Woman] I don't think it's been 10 years, but whatever Go ahead – It's totally bulletproof

It's totally DIY, and it works great Really simple The most expensive thing is the solar panel and the batteries, but like the wiring and all that, it's low voltage, we did it ourselves So I wanna walk you through it Okay? (dogs panting) This is the back of the solar panel

Pretty standard It has a frame It has some electronics here And then it has this cord coming out What this cord is, this is a outdoor rated heavy duty extension cord that we bought, from the big home improvement store

I'll link to some of them and the solar panel we use, in the notes below the video, here – [Woman] Did it used to be yellow? – Yeah, it's got a little dirt on it, a little mold and stuff (woman laughing) – [Woman] A decade worth – But this is really simple We picked the part of the yard that had the most sun exposure

You're gonna have to experiment a little bit and move the panel around And then we just put in a simple galvanized pole We built a bracket to hold it on, with some pipe, plumbing pipe And then, we just did a really simple trench, all the way to the cabin – [Woman] What're they doin'? – They're lookin' for their tennis balls

So this works best in sunlight, but the beauty of this, is we have some battery storage in the basement of the cabin, which it takes the solar power from the brightest part of the day and stores the electricity so you can use it at night You wanna see that? Okay quick, while she's looking for the ball So we've gone from our solar panel, and we just used a straight edge shovel, and we cut a slot in the yard, making sure there's no other power lines around The Call Before You Dig calls important here And then, we just cut a little trench, about three, four inches down

Excuse me Henry! Into the cabin over here Irony is, there's no lights in the basement, where the electricity's being stored This is the battery maintainer, controller Fairly inexpensive

Again, I'll link to it in the notes below the video here The cable comes in from the solar panel, and then with some batteries right below here We're using a deep cycle golf cart battery You can buy batteries specifically for solar panels Car batteries won't work, because they're not built for what's called deep discharge

Golf cart batteries are They're not cheap, but they work well They're right down here (dog barks) And a Labrador wants us to throw the ball – [Woman] In the basement? – In the basement

(dog barks) (dog panting) Girls! So we've run 12 volt wire up into the cabin Underneath here, I've got 12 volt fluorescent light bulbs (switch clicks) – [Woman] Oh! Shiny – No utility poles, no nothin' and you've got nice light to do your cooking by (switch clicks) Save energy

Over here in the living room, we've got it set up where you can plug in cell phone chargers, and we also run an AM/FM radio, all off of 12 volt power, which is really nice You can get car power adapter style receptacles that'll mount in your drywall I'll link to those below You can charge your cell phone You can split off to do multiple things

And you can run your radio (dance music) (woman laughing) We can't play too much of that or YouTube gets mad at us Even if you're on the grid, but you want to reduce your dependence on the grid, solar panel, some deep cycle batteries I'll link to more information below, about it, but I just want to share with you what's possible, with solar panels – [Woman] Oh, hello

(woman laughing) – All right, there you go There should be some stuff floating here to click on, to watch more Garden Fork videos More information about this is below, but I'd love to hear from you I learn from you Do you have a solar panel set-up? Do you want more ans-? What's that? (dog barks) I'll try and answer your questions