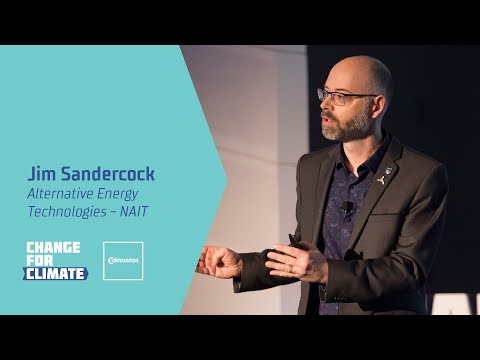 And we have a target of about 2 degrees Celsius at the top end before some really catastrophic stuff is going to happen So how are we going to deal with that? There's a couple of things One thing we can do is, we are going to use energy as a society – we're pretty locked in And we've got about 3 billion people still looking to catch up in terms of how much energy they're going to use, and then we've got another billion people on top of that who have yet to be born So we're going to have a huge issue

So how are we going to deal with climate change? Well, one of the things we could do, is we could start generating cleaner energy We could make electricity with things like solar We could have natural gas equivalents with things like biogas, because we've got a lot of waste And we can get into wind But the other thing is, and this is valid, there's a lot people that'll say but we use so much energy, there's no way we could make this transition, economically or otherwise

And a passive house in Edmonton would use about 5 to 10% of the energy that our standard buildings actually use We could start getting into more efficient electrical engines and motors that would allow us to make our industries more efficient, would also allow us to make transportation a lot more efficient as well And then, I think most of us in our homes have already started to pursue a little bit of, you know, lighting efficiency as well, which is actually one of the lowest hanging fruits and, well, everybody's doing it Now, we could get really excited about graphs like this This is the amount of electricity generated from wind turbines globally, over the last few decades

And you can see the growth is exponential, it's growing really well – 30 to 50% growth, year over year And that can be something that can get you really excited, and that does show us that something can be done but just to show you the energy context, this graph shows, over the last few decades, the amount of energy we consume as a planet This is our primary energy You can see green there is about 33% of our energy is coming from oil Just under 30% of our energy is coming from coal

But you can see how small it actually is So we need to transition, we need to transition very quickly This graph shows us that, in 2016, we actually had our global carbon intensity drop by 26%, which is great – it's the first time in a long time The other thing is that the Paris Agreement, the G20 countries have agreed to a target of about 3% decrease decarbonization rate

But for us to hit, and stay below 2% by 2100, we need a decarbonization rate of 63% So we've got a bit of a gap Well, some really good news The cost of renewables is plummeting and very quickly

Solar is an example The lowest cost solar in the world in 2015 was in the United States $39 per megawatt hour On your utility bill, that would be 39 cents per kilowatt hour

Way lower It used to be that renewables were expensive Mexico, it was lower the next year Dubai was even lower And then this year, we actually managed to get the world record lowest cost solar in the world – it was in Saudi Arabia, on a big project

179 cents per kilowatt hour That is the cheapest electricity in the world Bar none And that really is telling us that renewables used to be expensive, but that's just not true anymore

Now the scale of the whole thing is huge Some folks, like Bill Gates, have said, the actual thing we need to do to transition is so big, short of an energy miracle, we cannot possibly decarbonize fast enough And so he and many others are invoking things, saying well, we should do a ton of research and start doing things like fission and small nuclear reactors that you can have in small cities and we should do more with thorium reactors But the reality is, by the time we've designed those things, it's going to be 20 or 30 years before we have commercially available anything So what we really need to do is take the technologies we have today and deploy them at scale

If we were to take that big tax break that was given in the United States, or is about to happen in the United States, if that was divided out among all the households, that would be a 32 kilowatt system on every single house in America This, in fact, could be the greatest wealth-generating opportunity of our lifetime But perhaps more importantly, as we've heard tonight, there is a call to action What can we tangibly do? Well, one of the things we could do is, work in the realm of renewable and alternative energy

Now a lot of people will think, obviously, about that solar panel I've got up in the top right corner, with that AC/DC inverter but there's a lot to be said for heating and cooling 40% of the energy in North America actually is used by the built environment So, using heat pumps, like air source heat pumps and ground source heat pumps can give us heating and cooling for our buildings, as well as hot water But then there's other things, like bringing systems together and doing some really interesting engineering there Energy efficiency

Energy auditing Energy management plans And bringing in better controls Those are all possibilities But when we talk about renewables, most people think about solar

But there are a lot of other career opportunities as well When we talk about electricity, most people think solar So let's dig into that as well, let's look at the landscape there In terms of a career map, the United States, they found that their solar industry is growing 17 times faster than the general economy And so that's a really great opportunity for growth

We obviously think about things like electricians with solar experience, or people who are fully installing solar on a regular basis We also, however, should be thinking some of the people who are helping purchasing of solar to happen – informing people about how solar could work for their business or their house, helping them understand what it can and cannot do We also see things like residential designers Crew chiefs who actually run the solar team We've got project management going on, utility designers, and people who actually manage the O&M for whole, large utility scale solar plants

So even when we just go down into solar, there's actually a ton of different career opportunities where people can make a real difference So when we created our program at NAIT, the Alternative Energy Program, we obviously train about solar, we train about wind, a little bit of geo-thermal, if you like the mud And that's just in the first year And then in the second year, we start getting into things where we actually bring these different systems together in hybridization And business, and looking at energy management plants to help companies actually achieve their goals