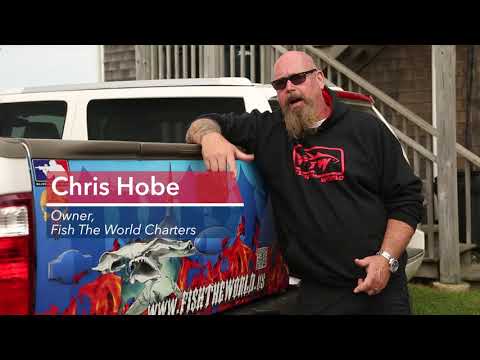 I've been fishing in the Narragansett Bay and Point Judith locations in Rhode Island since I was able to walk It's been a long time, and I've been going after all types of fish; anything that can hook a line, I go with it

I have fished at the wind turbines, I caught recently a 35-inch blue fish and a 34-inch stripe bass, and we're catching a bunch of a small black sea bass, as well as a couple trigger fish, which is unique in that area [Chris Walli] Block Island Fishworks has been open since 2002, and we've been running charters every year since then there isn't any place better than New England to fish, and it's a great place to raise a family And we've been fortunate enough to be able to do all those things The Deep Water Wind Farm project started over 10 years ago, to my knowledge

When we started hearing about it, my concern initially right out of the gate was, "Is it gonna restrict any fishing; recreational, commercial or otherwise? Are we gonna be able to fish around them? Is there going to be a security zone?" Those concerns, as they played out, from my perspective anyway, really diminished greatly as time went on and then, once the project's done, I see the benefit to the actual structures in the water from a fishing perspective immediately Already, in an empty piece of ocean, you have more life than there was two years ago The wind farm created five new spots to go fish, and each of one of those turbines is one new spot [Chris Hobe] It's an artificial reef, what gets better than that? Fish love structure, they love to hide You got the mussels that are growing on it and then you get the fish that are chewing on that and the whole food chain starts, it's a destination

It's an area that really wasn't fished that much Now that the mills are there and the talk is out there that we got a good system of fish out there, so there's more and more boats It's just a benefit, that's a benefit to the island also Deep Water contacted me to run charters out there for their corporate people and photographers towards the end of the build So as we were doing that, in the back of my mind I had a sense that there would be quite a bit interest of people wanting to come out and see them

The business level picked up more than I expected it to It continues to grow and I think next year should be as busy There's a lot of interest out there, I believe We'll definitely keep doing the wind farm tours as long as the interest is there, I think it's gonna keep growing We jumped on it and I'm grateful for that It's just another piece of that project there that I'm able to gain from