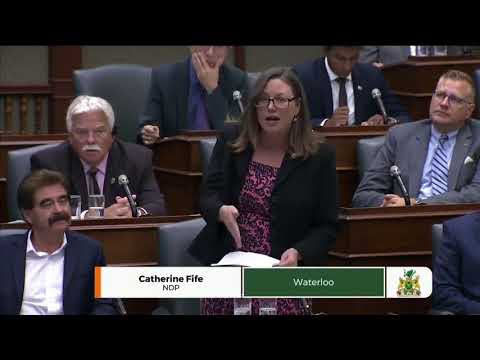 The Member from Waterloo Thank you very much, Mr

Speaker My question is for the Acting Premier Last week, the government announced that it had cancelled 758 renewable energy projects One of those projects was a hydroelectric power plant to be built on the Park Hill Road dam in Cambridge The Grand River Conservation Authority has been working for decades to get approvals for the project that would provide nearly 600 homes with cheap, reliable hydroelectricity

Instead, the contract was cancelled with no notice That means lost jobs for the people of Waterloo Region without taking one cent off of anyone’s hydro bills Speaker, what does the government have to say to the 600 families who will now see higher hydro bills because your government scrapped their cheap, reliable and environmentally friendly alternative? Minister of Energy Thank you, Mr Speaker

What would I say? Well, three words, but I’ll take my 60 seconds anyway: Help is here Those people, like all Ontarians, are going to experience $790 million worth of relief from cancelling those projects, most of them that communities didn’t need or want We’re committed to cutting hydro rates, not subsidizing them for future generations to take on that burden, Mr Speaker This is a promise made and a promise kept for today

The government is getting rid of any renewable energy contract that their insider friends don’t approve of The Park Hill Road dam would have provided nearly 600 families with cheap, reliable and environmentally friendly hydroelectricity Cancelling government contracts in this manner undermines investor confidence It signals to the business community that the government of Ontario cannot be trusted as a business partner Speaker, will the government do the right thing and fulfill their contractual obligations for the people in Waterloo Region? What we’re going to do is fulfill our promise, our promise to reduce hydro rates by 12%—to cut them, not subsidize them as this member and her party had supported time and time again when the Liberals were ruining our hydro with the unfair hydro act