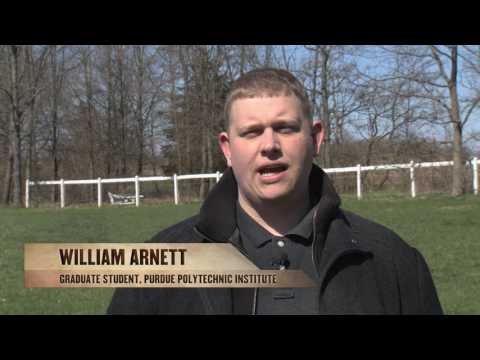 Welcome back to Boiler Bytes Have you ever wondered if it would be possible to set up a solar energy source at your home or place of business? Well as part of a SolarCertification Program, a group of students from Purdue

along with a Professor of Mechanical Engineering Technologyrecently performed a Solar Assessment to help a property owner determine whether or not they could benefit from solar energy The grant we got is actually called the Solar Endowment and it's actually funded by the US Department of Energy out of the National Renewable Energy Lab in Golden, Colorado The site assessments and analysis is done by students and basically students don't come into the project knowing that much about Solar Energy and how it's evaluated, the economics, so the starting point for students is to go through a Solar Certification Process And it's a combination of online training, plus fieldwork, that gets them this certification Implementation of solar energy

we can get a lot of electricity from it and I believe, here though the weather is a little tricky, but then you can still get quite a decent amount of solar energy And reducing your carbon footprint is, I think, the key to our future It's about maybe 20 hours worth of training

So I would say they're Solar literate and then at that point, it's it's important to put that textbook training or online training into practice Typically we've contacted homeowners that are interested in solar and the question is, is the time right to invest? The end goal is to have students that are able to go out to say a residence or a small commercial building and evaluate the potential for solar energy And so it's everything from the existing electrical infrastructure to the amount of shade at the site, to the physical space at the site So the way that that's what they're at the end result is to be able to give that report to a homeowner and say here is the potential, here's the cost, here's what the payback's gonna be In doing a Solar Assessment for a residential area, if the owner is inclined towards reducing his carbon footprint, reducing the amount of electricity he uses from the main power grid, then comes Step 2 where you come to the site and see what can be the possible locations making where you can actually put the PV panels – which is photovoltaic panels

For the assessment we're going to assess the structure of a PV location, along with the preference of the client and we're going to be looking at the interconnects and the conduit runs, along with taking a Solar Assessment using a tool called the Solar Pathfinderwhich will show us just the shading that's available We would love to have, you know, a lower cost of energy to run the farm, so the idea of having solar panels and something that's gonna help us, you know, lower the costs of operating the farm and everything

it's a really exciting idea Once we get the solar panels up, lower the cost of electric per month, and you know hopefully in a few years, it would pay itself off and just run from there They'll look at if this homeowner wants the Solar maybe on the roof of their home

They'll look at the truss structure at the roof of the home just to make sure it can support that weight And they'll inspect the electrical distribution system for how are we going to tie this into your network And then a key thing that a lot of people forget about is the shading issue So you've got a great space for solar but you've got a big tree in front of it, that's going to shade it this time of the year That's probably not a good match There's a lot of technical details involved which can determine where we can't put the panels at, but then the first step is actually to assess the house and see where the owner wants it to be at You can put it on the roof Generally people do flush-mount which dictates the angle of the array

which also affects the amount of power that it can output But putting it on the ground mount, we don't have to worry about the structure, just a ny underlying underlying utilities And there's a large chunk of area right here so it could be very beneficial with no possible shading around

But I'd say they generally speaking, they have a nice chunk of open land They can put in a ground mount location and run the array back to their basement and interconnect into the breaker Solar energy initially started off being quite expensive, but then we are seeing now that the continuous cost of solar panels have been reducing drastically since we proceed in technology And now it is the efficiency of panels are increasing, photovoltaic panels are increasing, and the cost of photovoltaic panels are also decreasing There's the matter of the initial investment so it could be anywhere from $40,000-$60,000 depending on the size of the array obviously

and then taking advantage of any incentives such as the Federal Investment Tax Credit which is about 30% The whole idea of sustainable, renewableinstead of just burning and burning fuel and everything like that, there's got to be better ways to get energy, you know As Americans we use a lot of energy so find ways to do that without hurting the Earth I'm all for it I've always been interested in renewables and sustainability

so that was a big thing but also understanding the financing economics behind implementing them, which is, you know, kind of outside of my normal range but I'm becoming better at it And it's just been very beneficial time We can't depend on fossil fuels for much longer

And depending on how people are so inclined towards, I believe projects like these in implementation are essential The Solar Certification process aides students in gaining knowledge and experiences that allow them to explore careers in alternative energy after graduation That wraps up another Boiler Bytes Be sure to check us out online at boilerbytescom See you next time!