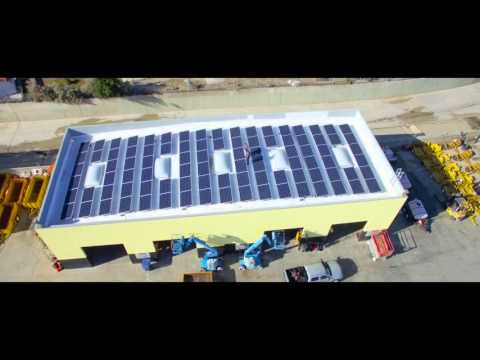 We have a general equipment rental company Anywhere from wheelbarrows to bulldozers To shovels, rakes, you name it If there was a return on an investment, we do it We have 28 people that work here presently We're trying to promote a team atmosphere Where there's no specific goals and controls on one individual So everyone is working for the betterment of the whole Six or seven years ago we put the solar system at our house Today, I don't pay anything for power Over the term of the 25 years that the system is guaranteed for We're going to save about $336,000 in power That's a lot of money in anybody's pocketbook We here at AV Rentals just turned on the system last week We finally got approval Now we hope to have the same story in 5 years It's paid off, it's done, it's return like it's supposed to do And I think it will do the same And everyone around us can be paying for their power bill And I already explained to you what the costs are And if you don't take advantage of it, you're nuts as far as I'm concerned Making the decision for AV rentals was a lot easier once I did my own home But it was a good decision And I think that over time, we'll make a lot of money on the system that's here And it's just a matter of just putting up there and maintaining the system And they've done a good job on my house And I don't suspect anything to change, I think they've done well If everybody could fashion themselves around what Green Convergence can do I think we'd be a much better place to do business here In the Santa Clarita Valley