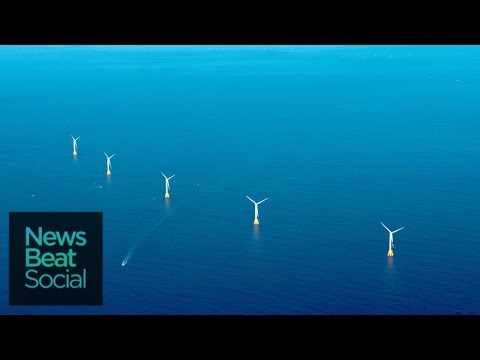 America's first offshore wind farm is up and running off the coast of Rhode Island This week, the long, narrow blades of the tall, white wind turbines started spinning over the Atlantic Ocean

The wind farm was built by Rhode Island-based energy company Deepwater Wind with help from the state's political leadership In a statement from Deepwater Wind, Rhode Island Sen Sheldon Whitehouse called the wind farm a "historic milestone for reducing our nation's dependence on fossil fuels" The wind farm will mostly be used to power a small island community called Block Island Before this project, the community got all its power from diesel generators With only five turbines, the Block Island Wind Farm is relatively small and construction wasn't cheap

All said and done, the project cost about $300 million However, it can reportedly generate power for about 17,000 homes, cutting annual carbon emissions by about 40,000 tons Deepwater Wind plans to eventually expand its offshore wind farms to New York, New Jersey and Massachusetts For NewsBeat Social, I'm Molly Riehl