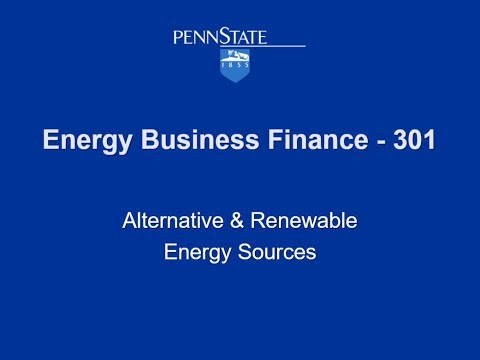 Tom Seng: This lesson is going to be on alternative and renewable energy sources The main types that we're going to talk about are wind, hydro, solar, geothermal, and biomass

Wind power once was used for mechanical drives only It's gaining in popularity as a clean, alternative source of electricity using turbine generators You know, the old windmills, as they were called, were used on farms to draw water up from aquifers to serve as wells on their land And way, way back they actually did things like ground flour and corn, and those types of things Today, we have large wind farms that are being built across the country where wind becomes a natural resource

Some of the concerns with these, obviously, noise pollution in the area for the residents of that area And there have been numerous reported deaths yo flocks of birds flying in those areas And as you see the picture on the left there just shows what are some 750 kilowatt turbines in the state of Minnesota on a large wind farm there Hydropower, basically using water force as energy Traditionally, it had been used to churn mills

That's why we would have those water mills And again, they did several things with those from a mechanical energy standpoint But today we have hydroelectric generators We have most predominantly, hydroelectric dams But we also have what are known as tidal power turbines

Now, these are actually utilizing the current flows generally in and out of a river or in and out of some type of an inlet They use these in the North Sea off of Scotland There's an experimental one in the East River in New York City as well Again, they're subsurface turbines that actually spin as the current goes in one direction or another And those drive a generator which produces the electricity

Solar energy has been around for quite some time The interest in it and the expansion of it really began with the oil embargo of 1973 and 1974 And then the second embargo in 1979 caused even more interest in it The idea is to collect heat and energy from the sun and use it for things such as pure heating, generation of steam for electric turbines, or to actually create electricity directly, which would be the use of photovoltaic cells In a lot of cases, it's used to heat water even for space heating

And we generally have two types The passive solar energy is using the direct heat of the sun There are solar collectors and they can direct the heat in a particular area It's primarily used for space and water heating, and it can also be used to create steam So some of the panels you might see on office buildings or residences may be doing nothing more than circulating water for hot water heating

Others, I mean, you would probably recognize the difference– or the photovoltaic ones that are producing power And again, this brings us to the active part It's the photovoltaic conversion of sunlight to electricity using semi-conductive materials It's dependent on the atmosphere condition and the Earth's position relative to the sun And obviously off to the right there, you see a photovoltaic array small scale used here

But you see the more and more through-outs They're using it now for traffic signs, communications systems For instance, pipeline companies or any type of long distance lines, or cables, or whatever else signals are transmitted, and the power's coming from photovoltaic cells Geothermal energy We generally think of geothermal energy as natural steam, you know, coming from geysers and from other places

And in those cases, it could be used for direct space heating It can also be used directly for industrial processes Steam will also drive steam turbines at a power plant or on-site somewhere where there is the geothermal steam coming up But the flip side of that, which a lot of people are not necessarily aware of is the fact that you also have geothermal energy that's used for space cooling You know, after all, if you go several feet below the surface, the soil and the temperature down there are much cooler than above ground

And so you can literally drill down into the cooler area and draw up cool air to use for space cooling This is becoming more and more prevalent I have personally seen large homes that use this, as well as midsize office buildings Biomass, these are the various types when we talk about biomass and energy coming from biomass We're talking about things like wood, garbage, crops, various alcohol fruits– so in other words, fruits that can produce some type of an alcohol that can be burned as energy– and then landfill gas

Biomass, the one form here, landfill gas You basically have decaying trash that's in landfills, and it's going to create methane You know all the biological material that breaks down and decays will end up giving off methane gas And over time, the older landfills will actually have pockets of methane within them And there are people who will go out and they literally will poke a hole down into the landfill, and they will get the pockets of natural gas, and they'll use it on site

Mostly, they can use it to drive some small turbines or small generators to create power on site Some cases, they may have a process whereby they need to create some steam and so they'll use the natural gas for that as well Another form of biomass is to actually take solid waste and convert it to energy, or trash to energy This is where using solid waste that would normally go to a landfill, you're using it as a fuel to create heat via combustion, and in turn, create steam from the boilers where the combustion is taking place The steam can actually be sold for industrial purposes, or the generation of electricity can be accomplished by using steam as well

Now, there's a company in Fairfield, New Jersey by the name of Cogentrix Corp And they actually build and operate several of these trash to energy or solid waste to energy facilities around the United States Wood and wood waste, these are normally the byproducts from large wood mills and paper mills And what they'll do is, again, to be efficient and to be environmentally conscious, they'll go ahead and use the wood, or the wood waste, the wood pulp– they can actually burn it and then it becomes a heat source, where they can create their own steam that they'll use in the process, say, for instance, for making particle board, or even paper They can also use the heat source to run small generators on site for their own consumption and operations

The Weyerhauser Company, a huge manufacturer of various forms of lumber and wood, and particle board, and those types of things does this on location with a couple of their very large facilities they have in southeast Oklahoma And most of us are more familiar with this type of biomass, where we're making fuel from things like crops, grasses, and biodegradable matter One of the more well-known ones, of course, is making ethanol that we use as an additive to gasoline in our cars And the primary food source there is corn But there's also sugars that can be broken down into alcohol, as well as certain types of grasses

And on the bio-diesel front, we could use vegetable oil, peanut oil, soybean oil, and then recycled grease from restaurants once it's cleaned You can burn any of these in an existing diesel-powered vehicle