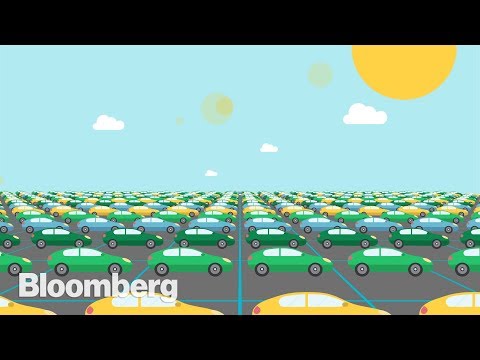 There’s a cloud looming over the future of clean energy It’s called curtailment, and it’s the biggest obstacle to weaning the world off fossil fuels

Curtailment actually happens when we produce too much wind or solar power at certain times of the day and we have to just — shut it down But what if we sent that extra electricity into giant batteries, to use when the sun goes down or the wind stops blowing? That day just might be coming sooner than you think The easiest way to curtail curtailment would be a massive explosion of energy storage Ideally: batteries There’s just one problem

Batteries are still way too expensive Take a place like Texas A quarter of the electricity from the Lone Star state comes from wind When the wind dies down, Texans just fire up a natural-gas power plant to make up the difference Battery prices would have to drop by half in order to compete with those Texan natural gas plants

Today, less than one tenth of one percent of the world’s electricity spends any time in a storage battery, and even by 2040 the best forecasts say that batteries will make up just three percent of the world’s power supply But consider the experience curve Renewable energy is a technology, not a fuel, so prices follow what economists call an experience curve: the more solar panels we make, the better we get at making them In fact, every time the number of panels in the world doubles, the cost to make them drops by 28 percent Solar power just recently became the cheapest electricity in the world, and it’s only going to get cheaper

And it turns out, the same thing is happening with batteries As we build more — with electric cars and electricity storage — the cost of batteries plummets It's already dropped 80 percent in the last decade, and could do the same in the next Boom At those prices, battery storage in a place like Texas suddenly becomes a no-brainer

We’re already starting to see it happen in places where electricity is expensive In Hawaii, the rainforest island of Kauai swapped its fossil-fuel power for solar-plus-batteries, And Tesla has made deals in California and Australia to install the world’s biggest battery fields The battery baron – Elon Musk  says his newly built, massively populated gigafactory will spit out batteries ‘faster than bullets from a machine gun,’ It will single-handedly double the global supply And he wants to start building at least two more Gigafactories in 2018 But Musk is in for an arms race

Chinese companies say they’ll build capacity for about three gigafactories worth of batteries by 2021 Samsung, LG Chem and others are also joining the fray Now, this is not a done deal If the battery revolution is going to work, tens of millions of people must switch to electric cars over the next decade to feed the experience curve But there are also new technologies coming soon like silicon anodes, solid state batteries, and lithium air that could skip us ahead on the experience curve by more than a decade, making battery-powered trains, ships and even airplanes possible

So, imagine a world where where city skies are clear of pollution, and where electricity is cheap and abundant It’s not crazy to assume that 20 years from now, over half the world’s power will come from nature, backed by batteries And it all might be happening sooner than you think