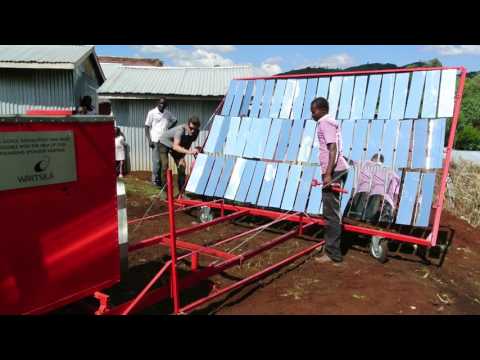 Our production output is lower than the market demand by now So if we can get another big one like this At least we are going to reach far places in the market Here we are back in Tinderet in Nandi County and we've just finished Installing the second SOL5 for the Koptige women's group We're all really excited about this because we think that next year They're going to get another SOL5, and the year after that they are going to get another SOL5 Because they're one of the only bakeries in this market They are selling out of bread every single day and more and more of that bread is going To be baked by our SOL5 Right and so you can tell that, by now wiggling, this one now it's too high It's high and left, see where it's reflecting? Bring it towards the center a little bit The SOL5 has attracted several people Schools, institutions, churches would like to have that kind of machine Because it is efficient and also cheap in terms of cost