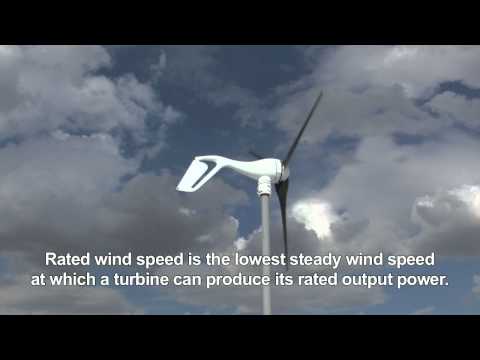 [long note] -[Thomas Jenkins] This wind turbine is designed specifically to either charge batteries, that you can use the energy from the batteries, or we can use this directly to power appliances in a home This is very useful for a cabin, a small place in the country, any place that's away from the electric grid, electric power supply lines

So you might use this to power a water pump, to pump water to cattle, or you might put it on a cabin in Cloudcroft, any of those kind of uses are very common We can also sell any extra energy back to the electric company in what's called a grid-tied system This particular model is what's called a 400 watt, that's the size, in other words it can power 400 watt light bulbs with the energy that it produces The wind turbine produces power under what's called it's rated wind speed which is a certain wind speed that is necessary for it to cause it, the blades to move at a particular rotation velocity How fast are the blades spinning? Once it reaches a certain spinning, it produces the 400 watts

If it runs for an hour, you're going to get about five cents of electricity savings The cost of something like this, retail is about $700 When you're purchasing a system like this, generally you buy the mounting structure separate from the turbine The higher you go, typically the stronger the wind There's a very nice relationship between height and wind strength

Wind has a tendency to be more turbulent near the earth, near the ground, so you want to get away where the wind is a little bit better, a little bit more stable It's important to mount the wind turbine safely In New Mexico you almost never mount this kind of a system to your house roof It's always separate from the home, on some kind of a pole We have a tripod pole and we have guide wires, and that's to counteract the force of the wind that has a tendency of course to want to push it over

We've also mounted some of our balance of system components to it, to the pole itself There's some meters that we have here, that help us look and determine how much energy we're producing under different wind speeds We also have what's called a shunt load, which is if we're producing more energy than we can use, or that we can sell to the electric company, we're offloading that to what's called a bypass load or a shunt load – [Announcer] The preceding was a production of New Mexico State University The views and opinions in this program are those of the author and do not necessarily represent the views and opinions of the NMSU Board of Regents