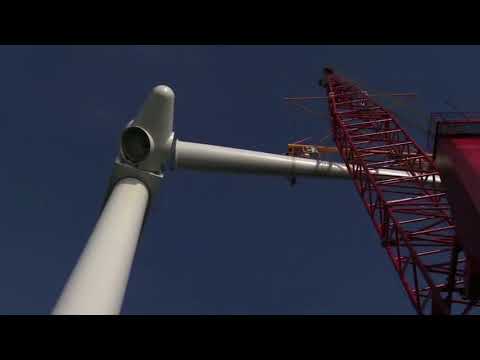 (mid-tempo music) – The installation's been excellent, we've been very lucky with our weather in the summer months So low seas and light winds and we have managed to install both turbines in four days

So now that we've completed, we're gonna jack the vessel back down and we're gonna sail into (mumbles), which takes about four hours, we'll load out the next two turbines, which takes approximately one day, and then we'll return the install the next two and we'll keep on going until we hit the magic target of 140 Seajacks is a relatively new company and this is their first major wind farm project, so it's their chance to establish themselves as a market leader in the industry We brought over the safety standards from the oil and gas sector, and so far the construction and installation project has gone exceptionally well (upbeat music) The Seajacks devicing can accommodate up to 90 people, at the moment, we have 58 on board and approximately half of those are the core crew for the operation of the vessel, the other half are the construction workers and contractors for building the turbines The vessel is manned up with professional trained staff from the merchant navy background as well as an offshore background

The services we can provide are offshore oil and gas workover, construction of (mumbles) supports, as well as working in the wind farm industry for construction of turbines and transitions pieces (upbeat music)