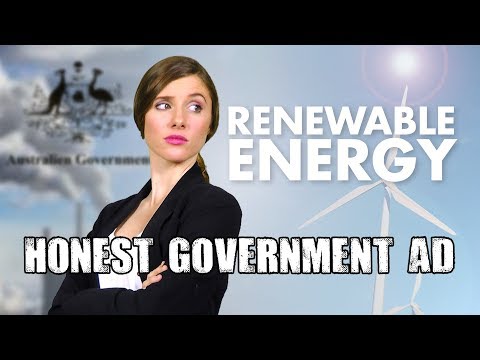 Hello, I’m from the Australien Government We know you want us to transition to Renewables ASAP so you can get on with your favourite activity continuing human life on this planet Well, good news There’s only ONE barrier left between you and a clean energy future It's not technological it’s not economic

Nope, it’s us! That’s right: after ditching the carbon price, dumping this, refusing this and tryna kill these we’re proud to bring you: NEG The Negligible Energy Guarantee Coz it’s such a watered-down pissweak policy that it’s literally worse than doing nothing at all Which is precisely why our BFFs love it so much And keeping them and this bunch of nutjobs happy is pretty much our official energy policy I mean, why should we encourage Renewables? We should let the market decide how we get our energy And nothing says “free market” like propping up a dying industry with your tax dollars Or trying to force this ancient relic to stay open, when even its owners are saying coal is dead Sadly, not everyone shares our dream of delaying the transition to clean energy Like those smug eco-hipsters in South Australia who went and reached their 50% Renewable target a decade early and are on track to hit this one by 2025 Just coz they invested in shit like the world’s biggest lithium-ion battery Built by combining two resources no longer found in Canberra – leadership and brains – it’s only been running for a few months and is already making us look like dickheads Whatever There is one Renewable resource we do believe investing in: BULLSHIT Bullshit is what fuels our daily fermongering about blackouts and high prices when in fact, Renewables are responding to peak demand AND reducing electricty bills Which is why, instead of waiting for us Aussies are taking matters into their own hands to get this shit done And it's why the market invested 9 billion dollars in 2017 alone Into solar farms solar solar trains… solar whatever-that-is Heck, even these pricks are investing in solar And why not? With the prospect of new jobs, cheaper bills AND avoiding epic climate change fail what kind of energy neanderthal would want to stand in the way of the Renewables Boom that’s coming? Well Us 🙂 Australien Government We’ve stopped the boats Now it’s time to Stop the Sun Authorised by the Department for transitioning to the Dark Ages

Wind energy in the occupied areas in israel – vpro Metropolis