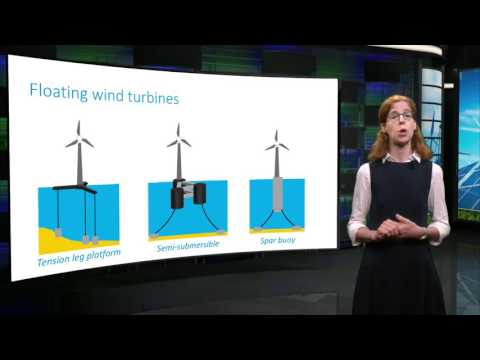 In this final video on wind energy, we will discuss the future developments in the field Can we do better in extracting energy from the wind? What are the challenges and expected innovations in the field? After watching this video, you will be able to: distinguish between the main types of foundations for offshore wind turbines explain the limitations of these foundations in deep sea, and enumerate a few innovative concepts to harness wind energy at a lower cost We already saw in the very first video that offshore wind energy offers many advantages compared to onshore wind energy

At sea, the space necessary to install farms of wind turbines is more easily available The wind speed is also generally stronger and more uniform, as it is not affected by buildings, trees, etc Until now, the expansion of wind energy generation offshore has been achieved mainly by borrowing the technology and knowledge of onshore wind energy This means that the vast majority of offshore wind turbines are 3-blade horizontal axis turbines, whereby their axis of rotation is parallel to the sea They are also mostly placed on monopiles, which are single cylindrical structures

An example of such wind turbines is given by the London Array, one of the UK offshore wind farms located off the coast of Kent Another option is to place the wind turbine on a jacket, where the tower is built on a platform supported by a series of cylindrical tubes An example of such structures can be found in the Alpha Ventus wind farm located off the coast of Germany Athough other types of foundations have been developed, monopiles and jackets were the only two types installed in 2015 in Europe And, as you can see in this slide, monopiles are by far the most widely used

As a side note, the total amount of foundations installed in 2015 reached about 3300 All of them are placed in waters with a maximum depth of 60 meters However, in Europe alone, most of the seas are much deeper The areas where the water depth is more than 50 metres, depicted in light and dark blue in this slide, are preponderant And this is also true for the rest of the world

So why don’t we install wind turbines in deep water? Well, today’s bottom-mounted foundations are not economically viable in deep seas Beyond 50 metres depth, it becomes increasingly costly to mount these piles directly on the seabed A possible solution is to place wind turbines on floating foundations, that are moored to the seabed Again different designs exist, mostly depending on the water depth at which the turbine is installed These include tension-leg-platforms, semi-submersible, and spar buoys

These options are currently being investigated by many companies, and several prototypes are now installed for testing The use of a floating support and mooring lines decreases the cost of deep sea installations, but it also increases the technological challenges With these concepts, the entire wind turbine can move, for example in heave, that is up and down following the waves, but also in pitch, tilting against or with the wind It is therefore important to ensure stability of the entire wind turbine, whilst still producing electricity These motions also create challenges for the control of the wind turbine itself

Despite these challenges, floating wind turbines are on their way to commercialisation, with large projects being built for example in Scotland and Japan With innovative foundations, such as floating structures, the question also arises of whether we should change the wind turbine rotor The horizontal-axis wind turbine commonly used onshore might not be the economic optimum far offshore Ongoing research projects are thus looking at other concepts, such as vertical-axis wind turbines, two-bladed wind turbines placed downwind, that is on the back side of the nacelle, and flexible blades that can fold to sustain hurricane winds This is only to name a few innovative concepts

The future will tell us if these ideas can substantially reduce the cost of energy offshore The last topic I want to touch upon is airborne wind energy, that is harnessing wind energy at high altitudes In this context, the wind turbine is replaced by a wing (or an airplane) tethered to the ground Due to the absence of tower and long blades, airborne wind energy systems can reach altitudes of several hundreds of meters This technology is still at a very early stage of development and different concepts exist

Here in Delft, researchers are looking into using flexible wings (such as kite wings) for this purpose Our prototype of 20 kW has demonstrated the feasibility of this concept The challenge now is scaling up this technology to produce hundreds of kW with one device If you want to know more about airborne wind energy, TU Delft offers an online course on this subject In this video: we discussed the two main types of wind turbine foundations used offshore we explained the current challenges with placing wind turbines in deep sea, and finally, we considered a few innovative concepts that could yield wind energy at a lower cost This is it for the subject of wind energy

Good luck with the rest of the course!