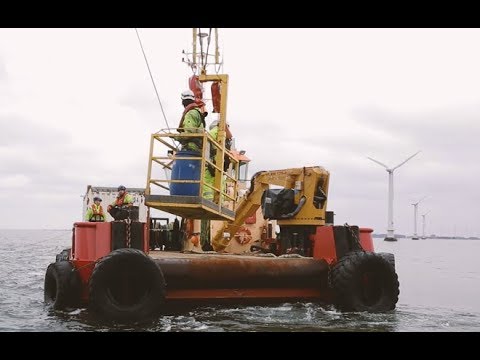 DECOMMISSIONING VINDEBY OFFSHORE WIND FARM When the world’s first offshore wind farm, Vindeby, was commissioned in September 1991 – it provided clean and green energy to almost 2,200 households With its 11 wind turbines and a total capacity of five megawatts – – located northwest of Lolland in the southern part of Denmark – – it marked the first step taken to reap offshore wind potential

Despite the wind farm's modest size, it has help paved the way for large scale Danish exports and job creation enabling Danish suppliers to gain a strong position in the industry Vindeby has been a really good proof of concept for offshore wind It lasted 25 years And when we decided to take it down – – we looked at the technical and the financial aspects And as they were found to be worn out, especially the gear boxes – – the decision was pretty easy, based on the financials in the project

So they were equipped with dehumidifiers, heat exchangers and anti-corrosive paint This was the recipe for success The solution is still a basic principle But now the turbines are being taken down After more than 25 years, which is longer than anyone dared hope for

With water depths of 2-5 metres – – all work must be carried out using relatively small vessels We've put great emphasis on minimising the environmental impact – – in relation to the onshore residents and the area's animal and plant life In 1991, the wind turbines were lifted into place in one piece Today, we remove one blade, then the nacelle and the remaining blades – – and finally the tower, and everything is loaded onto a barge This is done with a mobile crane mounted on a jack-up vessel

At the same time as the foundations are broken down – – the cables between the wind turbines and to the farm are removed Except for one turbine, donated to The Danish Museum of Energy – – all the components will be sent to Nyborg Harbour for reuse As spare parts for other turbines – – or as recyclable material for recovery companies Some components are sent for testing The Technical University of Denmark and various companies – – will study the life time of the wind turbine components

The concrete from Vindeby is of interest to me Because it's 25 year-old concrete, which has been exposed to a marine environment So I can make an analysis of the concrete – – which can tell me something about the durability and chloride ingress And then we can refine our models of chloride ingress in concrete – – that we use to predict the service life of concrete structures Technicians doubted whether the turbines could withstand sea water

But Vindeby exceeded all expectations Vindeby has been important, as it was the world's first offshore wind park And it has spurred the industry to look to the stable winds of the sea It has been a remarkable development from a small demonstration project – – to being the cradle for where we are today Vindeby marked the first step on the journey

And since then, offshore wind farms have become genuine power stations DONG Energy's upcoming offshore wind farm, Hornsea Project One – – will be able to deliver green energy to one million UK homes in 2020 But it all started with Vindeby