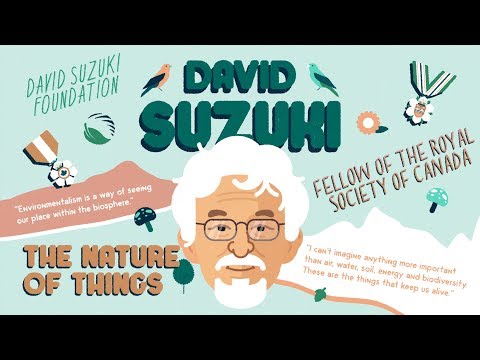 I wish I could imagine what Canada was like 150 years ago, but listening to my elders in the Indigenous Community — wow Canada was like nothing we can even imagine today

The oceans filled with whales, with seals, with forests everywhere, fish coming into the streams in numbers so great that you could literally walk on their backs They say the sky was darkened because the water fowl were so thick So that must be what it once was

Today, there are none of those things, and the kids don't remember The average child in a Canadian city spends less than eight minutes a day outside, and more than six hours a day in front of a screen And nature has become alien in our lives, and I think this is a problem — what is our baseline — what do we compare today with, we have no idea what it once was when the forest and the oceans and the rivers were filled with animals, we just don't remember that Canadians really have a kind of mystical worship of the Arctic, they all talk about the Arctic as a part of our identity and who we are But very very few Canadians will ever go up to the Arctic and experience it

Nevertheless, for over 40 years the Inuit, the people that live there in the Arctic, have been telling us something's going on with weather and climate You know they're having thunderstorms where they never saw such things The ice is getting strange So here are people who depend on their knowledge of ice for their very survival and yet they're saying we don't know how to go out there anymore Then we hear shipping companies say “that's great! Now that the northern passage is going to be free we can ship that way and we can save a lot of money”, and then we have oil companies saying “hey, there's lots of oil and gas up there we can drill up there

” That Paris agreement says at least 80% of the known deposits of oil, coal and gas have to be left in the ground If we don't seriously work to get off fossil fuels, the energy sector is going to rush into the Arctic and they're going to develop like mad So in many ways industry is celebrating, its only the Inuit who are telling us, this is going to have radically disruptive effects on us That Arctic is also a part of the climate engine that's responsible for the great currents that shape how heat is shared around the planet And we don't really know what the consequences are going to be

Quite frankly for me the Joker in the whole deck is methane There are massive amounts of methane frozen in the Arctic, and methane is 20-80 times more potent than greenhouse gas and carbon dioxide We already know that the methane is melting in Siberia — you can actually light the bubbles coming out of the oceans If that trend continues, all hell may break loose with what ecologists called a “methane gun” Just a sudden huge release of methane that will simply overwhelm our climate system

We have to throw everything into it and win When the Soviet Union shocked the world in 1957 by launching Sputnik, Americans didn't flinch, they just said we gotta—we got to catch up to them And in 1961, Kennedy said we're going to get astronauts to the moon and back within a decade They didn't have a clue how the hell we were going to do it! They just said “we got to do it” There are literally hundreds of spin-offs that have resulted just from that simple commitment: let's get to the moon first

It's dozens of technologies that have resulted from the space program — nobody had a clue! Who would have thought that we'd have 24-hour television networks Who would have thought we had laptops, or ear thermometers, or space blankets And I absolutely guarantee you the same thing will happen once we say: the energy of the future is renewable energy I've got a backpack that's got a solar panel When I walk around I charge my laptop and my cell phone

Why can't we have clothes, where everything is imitating a forest? I think we're at the beginning of a fundamental Revolution Hi I’m David Suzuki, in the future I hope that renewable energy is Canada