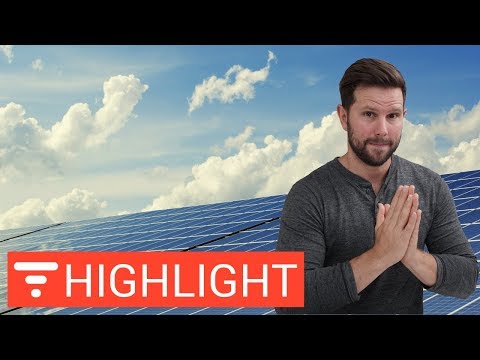 So imagine you're in an urban area or something like that with the big buildings where you're not going to get much sun at all, you know, those kind of things make sense Now this is a part of Jerry Brown, the current governor of California's plan to reduce carbon emissions by 40% Now the thing about that is he is on his way out so we'll see, you know, things in California aren't that back and forth but, and I'm guessing we'll probably get someone similar to Jerry Brown that supports this policy So don't think it's going to change but it is a question that, you know, he's on his way out and someone's new, they could maybe make a change to this So a quote here about it

This is massive said Morton Lund, chair of an energy storage initiative at Law Firm Stoel Rives LLP Essentially this could turn residential solar into an appliance like a water heater There's always been a certain inevitability about that outcome But this is moving faster than most of us thought likely So very very interesting

And you can kind of see this chart here about residential solar and what's going on with it We're talking a ten thousand megawatts for 2017 So there's still much more stuff going on And now we're just gonna see this number even just jump up after 2020 or you know, for any home that's built or I guess not sure if they have to like break ground on it before 2020 or if they have to actually sell it after 2020, meaning you know, they could built it the prior year or something like that So we'll see more about that

Now the question I had was will this really make a difference for Tesla because they do make solar panels out of their Buffalo facility, known as Gigafactory 2 But they don't really make a ton of it yet And there's some issues I understand with the, their partner Panasonic who's the one who actually makes them And so really questionable whether or not this will have any impact on Tesla at all Other than possibly batteries, but I could see a storage growing tremendously as well

So there you have it Now some other things about this is that some of the companies here are Tesla's shares, I'm not sure if they really, because this is more thought of as a power company But you look at some of these other ones, SunPower and Sunrun They just skyrocketed after this news So you can see a pretty big change there because of this

And it makes a lot of sense So one of the concerns that I should bring up because you know there's two sides to every decision like this is that installing and this is a quote from the article, installing a solar system and complying with other energy efficient measures required will add about $9500 to the cost of a new home, according to the Californina Energy Commission That would be offset by about $19,000 in expected energy and maintenance savings over 30 years, the commission estimates So in the end, it's the right thing, right You're gonna save money here

You're gonna save 100% more than you will spend However you are making housing more expensive So that kind of sucks, right Like that's a tough pill to swallow for a lot of people Now the state adds about 800,000 or I'm sorry 80,000 new homes a year and the California Solar Storage Association estimates that about 15,000 include solar

So the Energy Commission says that the average home's system uses 25 kilowatts to four kilowatts of panels So the additional 65,000 new systems would add as much as 260 megawatts of annual demand in the sate And they're saying that's about the size of one large solar farm Really, really interesting stuff

Now again as I mentioned, if you're interested, I just interviewed Brian Berserk, the founder and CEO of Wunder Capital that helps commercial companies go solar So you can go check that video out from last Friday because I think it's really insightful, just kind of someone in the industry that really knows his stuff, talking about how it works and what the future holds with it So there you have it